1.4.15
Chelsea was named a finalist in the Boston District of the Metropolitan Opera National Council Auditions. She will compete in the New England Regional Auditions on Sunday, January 25th. 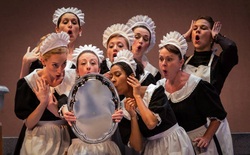 2.26.14
Chelsea is excited to be coming full circle at The Boston Conservatory as a new part-time voice faculty member, teaching two sections of the freshman Voice for Dancers class. 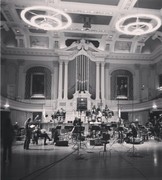 Photograph by Lindsay Conrad
11.17.13
Chelsea spent the day at Mechanics Hall in Worcester, MA completing a recording of Virgil Thompson's Four Saints in Three Acts with Boston Modern Orchestra Project, under the direction of Gil Rose.

The recording, which will be released in 2014, followed a very well-received performance of the piece at Jordan Hall on November 16th. 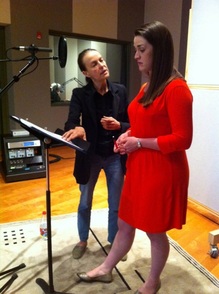 6.7.13
This morning, Chelsea visited Colorado Public Radio to record an aria from the upcoming world premiere of Libby Larsen's A Wrinkle in Time. An interview with Ms. Larsen and stage director Leigh Holman will air on CPR next week, along with musical excerpts.

As another part of the CU New Opera Workshop, Chelsea will perform in Making Sense of Sound: Vocal Works of Libby Larsen. She will sing "Anne Boleyn" from the cycle
Try Me, Good King. The concert is free and open to the public on Sunday, June 9 at 2:00 pm in the Music Theater of the CU Boulder Imig Music Building. 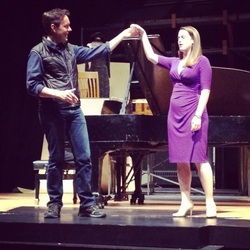 Photograph by Laura Brumbaugh
4.14.13
On Monday, Chelsea was very fortunate to sing in a masterclass for Jake Heggie, who was in residency at University of Colorado, Boulder. She sang one of the pieces from the composer's song cycle, Rise and Fall, which will be featured on her upcoming Master's recital, Tuesday, April 16th at 7:30.

Chelsea is also excited to announce that she will be singing the role of Mrs. Murry in the CU New Opera Workshop production of Act I of Libby Larsen's new adaptation of A Wrinkle in Time. Ms. Larsen will be in residency at the workshop, which precedes the professional premiere at Fort Worth Opera in their 2015 season.
3.4.13
Last Saturday, Chelsea was named a finalist in the Denver Lyric Opera Guild Competition for Colorado Singers. She will compete in the final round held at Bethany Lutheran Church on Saturday, March 16 at 1:00 pm.
2.8.13
Chelsea will be singing about Lost Love tonight with Opera on Tap in Denver. The Denver Post has a short feature on the show's new location.

Tech week is about to begin for Loveland Opera Theatre's La Bohème, which opens Friday, February 15th at the Rialto Theater in Loveland, CO. Chelsea will be singing in the Saturday family matinees highlighted in this article in the Reporter Herald.
1.27.13
Chelsea was named a District Finalist in the Metropolitan Opera National Council Auditions yesterday. Today, she will compete in the Rocky Mountain regional round of auditions. The event in open to the public, beginning at 1:30 pm at the Ellie Caulkin's Opera House in Denver, CO.

10.9.12
Yesterday, Chelsea advanced to the semi-final round of the Bruce Ekstrand Memorial Graduate Student Competition at the University of Colorado, Boulder. She also recently sang for an exhilarating masterclass with internationally renowned mezzo-soprano, Michelle DeYoung.

She is keeping busy in rehearsals for The Rake's Progress, which opens October 26th in Macky Auditorium, and preparing the role of Mimí for her debut with Loveland Opera Theatre in their February 2013 production of La Bohème.
6.25.12
Chelsea is entering tech week for a production of the children's opera Brundibar, in which she will be singing the role of Sparrow under the baton of conductor Michael Christie.

Performances will take place on June 28th and 29th at 7:30pm at the historic Chautauqua Auditorium, as part of the Colorado Music Festival. You can find ticket information here.
5.9.12
Chelsea has been cast as Anne Trulove in the Fall 2012 CU Opera production of The Rake's Progress.
4.15.12
Yesterday, Chelsea won 2nd Place in the Graduate Men and Women's Division of the Colorado/Wyoming NATS Competition.

For the remainder of the month, Chelsea will be busy with two assistant directing positions: Il Trovatore with Opera Colorado and Rossini's La Cambiale di Matrimonio with CU Opera.

2.29.12
Chelsea is thrilled to be singing the title role in Suor Angelica with CU Opera. She will be featured in two performances in Macky Auditorium: 7:30 pm on Friday, March 16th and 2:00 pm on Sunday, March 18th.

11.18.11
Chelsea is excited to be singing the role of Mimì in Act II of La Bohéme in CU Opera's Scenes Showcase this December. She will also appear as Donna Elvira.

Additionally, Chelsea is directing members of the undergraduate Opera Theater class in the opening scene of La Cenerentola.

8.18.11
Beginning August 22nd, Chelsea will be returning to school full-time to pursue her Master of Music degree in Voice Performance at University of Colorado, Boulder.

She looks forward to private studies with Julie Simson and a graduate assistantship working with Dr. Leigh Holman, Director of CU Opera.